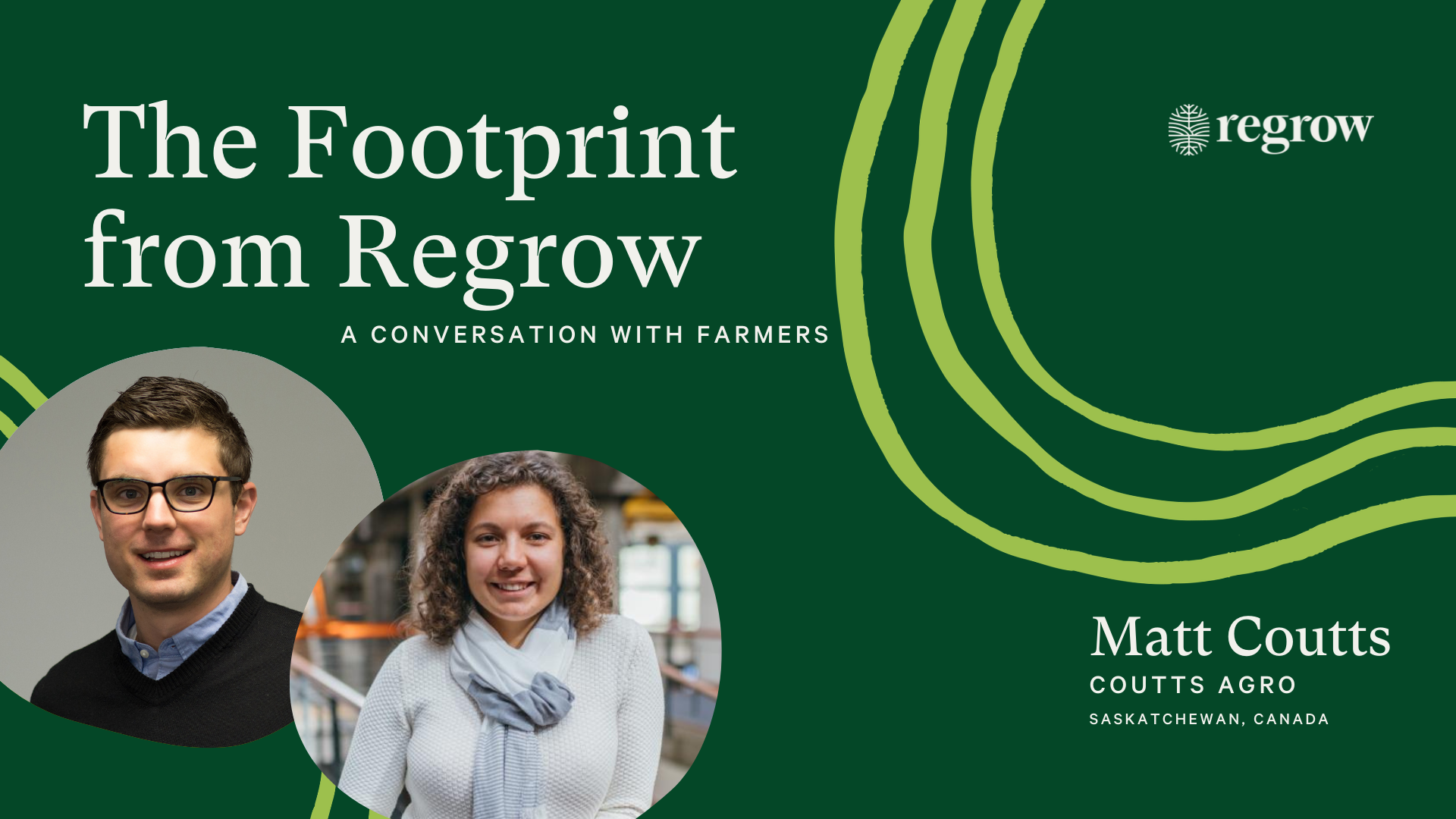 For my second farmer conversation, I had the opportunity to catch up with Matt Coutts of Coutts Agro. They produce cereal grains, canola and lentils on over 100,000 acres in Saskatchewan, Canada. The family is recognised as early technology adopters, which is demonstrated by their recent partnerships with the Nutrien carbon program and Solinftec and their expansion into the Canadian market. I caught up with Matt to hear his perspective on Influencing the Adoption of Carbon Farming with Canadian Farmers.

“In Canada, the carbon tax has been implemented and is being paid by our supply chain, who has significant market power and then is passed on to farmers. This tax was announced to increase to $170 per  ton by 2030 of carbon that is not accounted for, by the end of the decade.”

According to the Agricultural Producers Association of Saskatchewan (APAS) this tax is another “major hit to farm income”. Western Canadian Wheat Growers association estimates that the recent increase in a carbon tax will cost tens of thousands of dollars to each farm.

“Everything should have a price.”  “Carbon emissions due to production of certain commodities and mining of resources are taxed, while cereal and legume farming should also be rewarded for carbon sequestration.”

This is why Coutts Agro is bullish about carbon farming opportunities and has partnered with Nutrien to explore how to leverage this trend to balance the costs that are being passed on to them and improve their bottom line.

“I think we should be incentivizing for better performance,” says Matt. “The agronomic, economic, and environmental performance are almost always aligned. If we are making an agronomic decision, we won’t be embarrassed for it economically or environmentally.“

“Canadian farmers are very efficient - almost everyone is low or no till methods as it is desirable both economically and environmentally.” As a result, Coutts Agro has high nutrient use efficiency (NUE), and they do not have soil erosion from the rain. In the future, we hope to see all environmental performance recognized, include both visible emissions and areas such as efficient nitrogen use.””

“Currently, with respect to carbon tax policy, our sector has more of a survivor than thriver attitude. There is less incentive to outperform without a proper reward incentive structure.

Matt: Like many Canadian farmers we are no-till farmers. Frankly, you do not want to see any tillage in our part of the world. Unfortunately Canada has many constraints that limit the viability of cover cropping including moisture profile and other operational challenges.

Anastasia: What other opportunities have you explored that might lead to reducing your emissions profile?

Matt: Given that we already use no-till, and cover crops are not an option, we're quite interested in exploring the biological inputs. We see that these will give us an opportunity to reduce the use of synthetic fertilizers associated with the high carbon tax. We are always looking to improve our agronomy and be more efficient with inputs overall.

We are using an independent agronomy provider through a local John Deere dealership. They have 8- 12 agronomists in Saskatchewan and Alberta. We have been very impressed by the ability of independent providers to make decisions that are truly paying out for the farm.”

As an example, the soil last season was visibly dry and after reviewing the soil moisture probe information, was able to identify an opportunity to boost the growth of the roots, so they could access deeper levels of soil where the moisture was still present. They advised applying nutrients although it was not an intuitive decision. As a result, we had a bumper wheat crop.

All things considered, Coutts Agro is looking to be rightfully recognized for its good farming practices, and is looking to take advantage of the emerging carbon economy.

Would we be able to claim carbon credits because we are doing no-till? It seems unlikely to me given that all farmers in our area are no-till farmers. We will continue to explore options to reduce our carbon footprint through the use of technology on our equipment, reducing idle time and fuel use, as well as through a more thoughtful selection of input products to raise our crops. While we are commercial in our approach to carbon credit, the important thing is that we increase our margins on growing grain and making Canada a leader in proving global food security. A misaligned incentive system will penalize Canadian farmers and our customer, globally.

Carbon is an interesting revenue opportunity given it is not correlated with the weather as much as the crop yields are, so we're looking to explore ways that we can get involved.

As Matt sees it,

“Now is the opportunity for our farm to experiment with various ways we can sequester more carbon so we are balancing the income with the bills we have to pay.”