Where should I source my remote sensing imagery from? 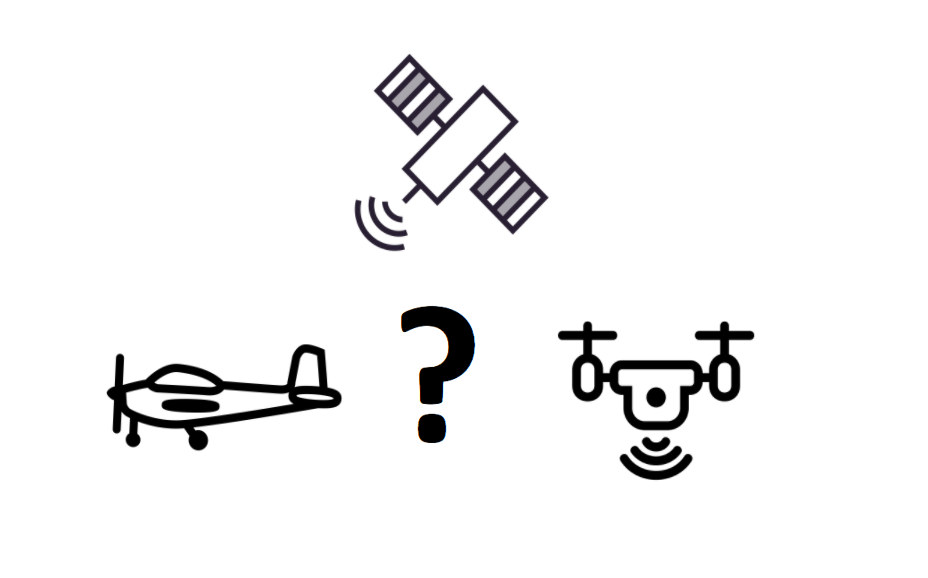 There are 3 main platforms used for remote sensing:

Each platform has different spatial and temporal resolutions, sensors and costs. The table below summarises the general characteristics of these platforms.

Low-resolution satellite imagery, such as Sentinel (10 m) and Landsat (30 m) is free and is available globally, and is only a matter of how cloudy your region/crop season is. If the season is/was not too cloudy, you can get up to 32 images in 1 cropping season. In a very rainy season, you can expect satellite imagery to be cloudy and the count of useful images to be down to 10 or even lower.

Since the Sentinel and Landsat programs are supported by these government agencies in the EU and US respectively, the imagery is free to the public but you need to have systems in place to retrieve it, and then make it useful for crop monitoring. You can either source each image captured over your farms manually using Sentinel-hub EO-Browser or leave this task to automation within platforms like our FluroSense, where it also retrieves all imagery automatically, as well as cleans it and analyses hot it relates to your crop condition.

In most large agricultural countries there are several go-to providers of manned aircraft imagery. In the US/Brazil we work with Terravion, and find the sensors and the imagery improving every year. In 2020, the resolution is <10 cm/pixel, which is much higher compared to other vendors (1.5m+) and also includes thermal imagery in addition to multispectral, which enables early crop stress detection.

If you don't have a local manned aircraft imagery provider or have a crop (usually perennial) that require monitoring only 2-3 times a season, it would make sense to turn to high-resolution satellite imagery. It is scheduled on demand, directly through FluroSense, and has flexible scheduling: from several days out or many months ahead of time. Another advantage of high-resolution satellite imagery is that you can request the image acquisition at a certain crop development stage (is estimated by FluroSense) or time it for field operations (e.g., pruning of tree crops), and if the image happens to be cloudy, you won't be charged for it!

We have many customers who are using drone imagery as an additional tool in their operation. Once they see issues detected in the satellite or aerial imagery, they use targeted drone "scouting" to check those areas out. You can read more about the best practices in our free eBook: "Drones for Farming: Beginner's Guide".

Important to note, that drones and aircraft can carry thermal sensors, which satellites are lacking (since thermal "reflectance" of crops is dissipated before it reaches the orbit). Thermal sensing can be used to detect small differences in soil temperature - which is an indicator of soil moisture or to detect early signs of crop stress that can be first symptoms of disease or pest infestation.

So how do I choose the right resolution for my needs?

When looking at choosing an imagery source, a good question to ask yourself is “what’s the highest resolution we really need to answer the problem we are looking at?” You're going to need at least 3 pixels covering the unit you are examining.

When choosing your tools, be strategic: just because you already use one doesn’t mean it will be the right for the task and the most cost-effective.