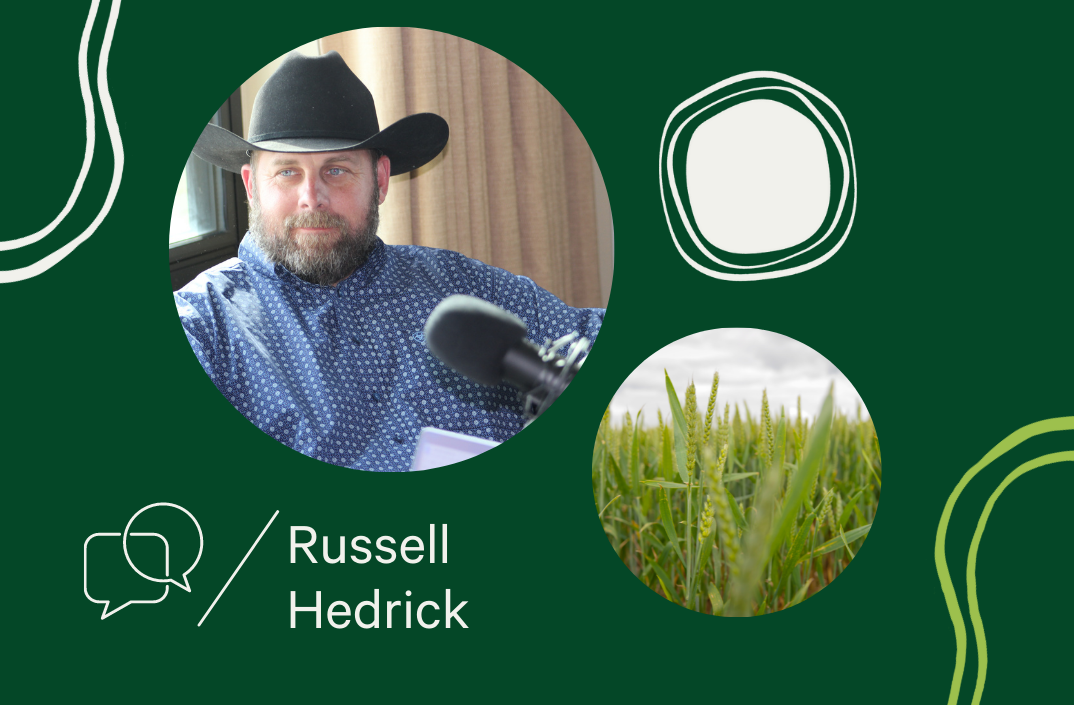 Growers need a wealth of resources when transitioning to sustainable farming practices. They need historical farm data, knowledge of weather trends, and a careful crop rotation to build a system that works with their farm and location. They also need industry connections, firsthand knowledge and a solid financial plan. These factors contribute to a grower’s ability to take risks and try new practices.

Russell Hedrick, a first-generation grower in Hickory, North Carolina, started with few of these resources. In fact, before starting his farm he had a career as a firefighter. However, it didn’t take him long to gain the connections, the experience and the game plan he needed to build a strong and resilient operation.

We recently spoke with Russell to learn more about his experience adopting resilient farming practices. Together, we learned that experience comes in all forms and timelines. Even more importantly, we learned there’s no prerequisite to regenerative farming.
‍

Russell started farming in 2012 with 30 acres of crop, and in less than a decade he’s grown his operation significantly. “Now, our operation is growing crops, pasture raised beef and pork. We do direct sales marketing for grain products,” Russell said. “And we’ve also partnered with Foothills Distillery, which makes the first bourbon in North Carolina since the Prohibition Called 1712 Spirit’s.”

That growth didn’t come without its pitfalls. In fact, the pitfalls Russell experienced in his first year propelled him to learn more about agriculture from experts in all forms. “Our first year farming, we had issues with winter weeds, winter erosion. We were looking at management as a defense — looking for defenses for these [issues]. And then I met a NRCS employee, who taught me all about cover crops. At that point, the USDA had just come out with a video called ‘Undercover Farmers’. So I watched a 30-minute video and ordered a cover crop seed before we even had a cash crop in the ground.”

Russell understood that, in order to combat weeds and erosion on his operation, he’d need to experiment with cover crops. He did his research, made a quick risk assessment and established a plan for the future of his operation.

Though the start of his transition was quick, Russell was careful not to throw his full operation into a risky environment. Although implementing cover crops on all his acres, it took him 4 years to transition his farm to utilizing the Haney test — a comprehensive soil test named for U.S. Department of Agriculture scientist Rick Haney — and reducing his fertilizer inputs. Even then, Russell was uncertain about his return on investment. He conducted two types of soil tests in his fields (a Standard University test and the Haney Test), comparing one to the other to make sure he understood his bottom line.

“Now we can prove how much money we're seeing — return on investment — on our operation, just cutting back [on inputs].”
‍

Russell has built a steady operation over the last decade, and he relies on regenerative practices to keep his soil healthy, his input costs low and his margins high. Now, he shares his methods with farmers across the country, and continues to glean information from industry experts.

“A lot of farmers start to pay attention in bad times. In my area, we had field days [with 200 to 300 attendees] from 14 or 15 states. We had a guy fly in from Great Britain, another guy fly in from Australia… and not one single farmer from our county came to my field day. Not in 2012, 2013 or 2014. And then we went into a difficult drought. We had four inches of rain in our entire growing season in 2015. From March to September, the county average for corn was 9 bushels. We made 128-bushel corn on our farm, on average. That's when farmers started paying attention, when they saw that what we were doing was a little unorthodox compared to conventional farming.” Though a little unorthodox, growers realized that Russell’s regenerative practices were working, and that this operation truly was more resilient in difficult weather conditions.

Of course, farmers should take caution when implementing any new farming practice.

“All farmers want a silver bullet,” Russell said, “I tell other farmers in my area exactly what we're doing, but… what I'm doing is not going to directly affect them in the same way.”

Another key aspect of Russell’s advocacy is sharing his missteps. Farmers, he says, are not keen to share their failures. However, sharing failures and lessons learned is a key component in promoting the adoption of new practices.

“Failures hopefully happen on the back 40 acres, that nobody else saw. But one thing I'll say about the community of people that I've met on my regenerative journey: everybody's willing to share the good and bad, and that's really saved us a lot of headaches. Something I learned from another farmer is that if we don't try something new every year that we fail at, we're not trying hard enough.”

This concept — acknowledging failure as a means to success — is not new in the regenerative ag community. Jay Brandt, a grower in Fairfield County Ohio, echoed this sentiment in a recent conversation about the importance of testing management practices.‍

Whether farmers are sharing insights, successes, failures or frustrations, Russell feels strongly that a strong community is essential to the adaptation of regenerative agriculture. His standpoint comes from experience.

“It comes down to peer access. When I was a full-time fireman wanting to go into farming, the one good thing I had was time. I could sit at a computer, find somebody's phone number and call them up. And even though they didn't know me, they would spend hours on the phone. It gave me the confidence to try something new. I think that's where we're going to affect change. I will always have the greatest respect for the farmers who mentored me through this process”

Shared knowledge, connections, successes and failures. The more information a community shares, the more resilient that community — and those farms — will be. Sharing Responsibility for the Future of our Food Systems