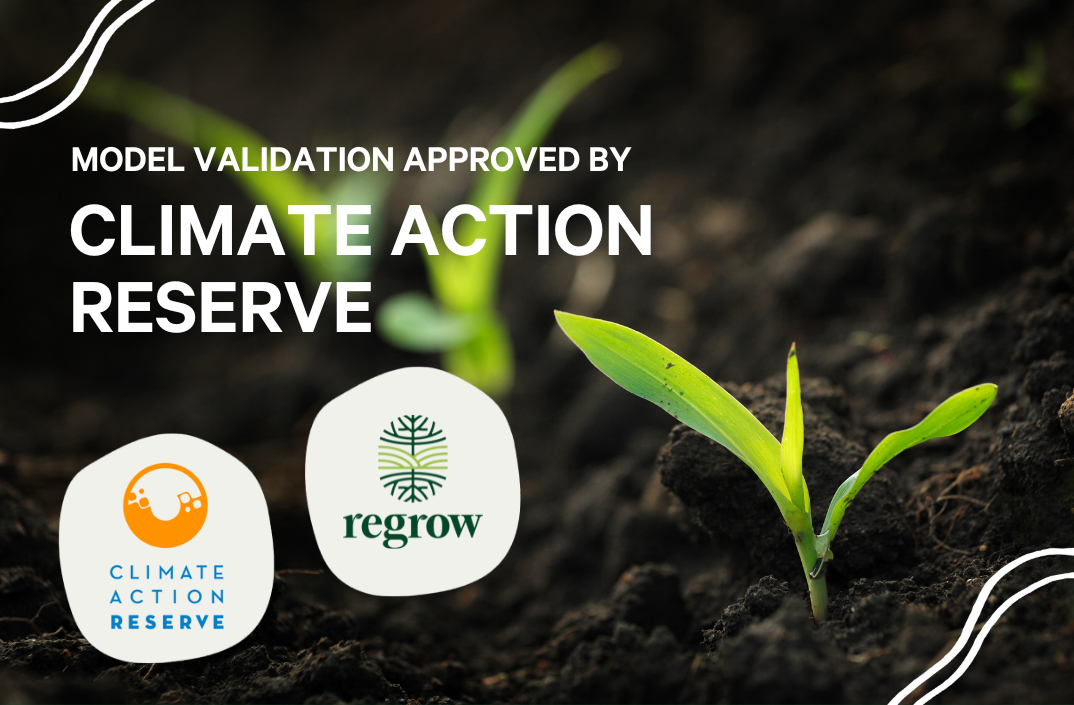 16 Aug, 2022 (San Francisco, CA, US) — Today, Regrow Ag is proud to announce that its model for quantifying soil carbon sequestration and greenhouse gas emissions was granted the first generalized approval by the Climate Action Reserve (CAR) under their Soil Enrichment Protocol (SEP).

CAR is the most trusted, efficient and experienced offset registry for global carbon markets. The Reserve establishes high quality standards for carbon projects, oversees independent third-party verification, issues carbon credits and tracks the transaction of credits over time in a transparent, publicly-accessible system.

The approved model validation is now embedded in Regrow’s MRV platform and data infrastructure and represents a new paradigm for the scalability of agricultural carbon projects.

Project developers will now be able to focus on engaging with farmers and building programs while relying on vetted, transparent and scientifically rigorous modeling provided by a trusted 3rd party, and the use of this model will allow for comparability across projects that has previously not been possible.

The Soil Enrichment Protocol is a CAR methodology that provides guidance on how to quantify, monitor, report, and verify agricultural practices that enhance carbon storage in soils. SEP was established to ensure strength and integrity for agriculture-based carbon projects in the U.S. CAR has now approved Regrow’s model validation which demonstrates that the biogeochemical soil model DNDC, commercialized exclusively by Regrow, meets the quantification requirements of CAR SEP.

DNDC, which stands for DeNitrification DeComposition, is a model backed by a robust academic community, developed to estimate soil carbon levels and quantify GHG emissions and reductions. Both DNDC and the product it supports, Regrow’s MRV, facilitate the development of scalable ecosystem markets for agriculture. Regrow’s MRV allows for independent and transparent measurement, reporting and verification of projects aimed at reducing emissions in agriculture.

The Climate Action Reserve has approved Regrow’s model for use across most of the continental United States and for major U.S. crops, including corn, sorghum, soy, peas, wheat, barley, rye, oats and more.

Practices approved under this methodology include cover cropping, reduced/no tillage, and nutrient management. Approved regions are detailed in the map below:

Regrow is the only company that has approval from CAR to credit soil carbon removals and N2O emissions reductions using process models.

For Regrow, this approval is both empowering and encouraging. “CAR approval will allow projects to move forward without undergoing model validation, enabling CAR SEP projects to be launched and scaled in a streamlined way,” said Regrow CEO Anastasia Volkova, PhD. “We are excited to empower our partners to leverage a CAR SEP-approved quantification approach within Regrow MRV to accelerate agriculture’s transition to net-zero emissions in a transparent and credible way.”

“We look forward to the market having access to Regrow’s modeling approach for use under the Reserve’s Soil Enrichment Protocol and the market enablement opportunities it may bring.”